Sonia Rubinfeld, a graduating senior in the Religious Studies program at MMC, connected her knowledge to the field during a 10-day trip to Israel with non-profit Hillel International.

Commonly known as “birthright” (based on the like-named organization) these trips are expenses-paid heritage tours of Israel for Jewish youth. “No matter one’s political views of the state of Israel, who could turn down an offer like that?” she writes. “Even though I went alone, there were 43 people on our bus, and so I made friends very fast. Each trip also has six Israeli soldiers who come along, and it was so amazing to meet people my own age from a completely different culture.”

As a senior in college, she was one of the oldest people on the bus. The vast majority of participants were either freshman or sophomores in college, and even the Israelis were only 20 years old. For the first few days Sonia felt a little awkward. Why did I wait so long to do this trip? she asked herself. Why didn’t I do this when I was 18 or 19, like everyone else? But as the trip went on she became increasingly grateful for all of the experiences she’d had over the past several years that prepared her academically, mentally, and emotionally.

“Pretty much by accident I began studying Religious Studies at Marymount. It wasn’t what I expected to study in college, but I really liked the professors and found the material much more interesting than many of the other classes I’d taken.” Having the opportunity to study specific traditions like Christianity, Judaism, and Islam, as well as the theories of religious studies that help frame ideas when learning new traditions, had been so rewarding for Sonia – and the trip really reminded her of that. Everywhere the group went and every time they experienced new things, she was reminded of subjects learned in classes at MMC, or was able to use that knowledge to analyze her surroundings. “Jerusalem especially was an amazing experience, because I had been reading about the city for years, and to actually be there was amazing. In the end, I was so glad that I didn’t go on this trip when I was 18, because the last 4 years of education made it so much more incredible and helped me to better understand the historical and cultural significance of my surroundings.”

A prodigious traveler, January’s trip to Israel was not the first international flight Sonia’s boarded. Each summer during her undergraduate career has included a study abroad program, including an eight-week program in Germany, a ten-week session in Austria, and a 12-week semester this past summer in Russia. Each trip required some level of adaptation, whether for a new language, writing system, and cultural traditions. “Having been to all of these places helped me on this trip to be comfortable in new situations and to make friends quickly. I noticed some of the younger people on our trip experiencing homesickness and culture shock, and I was so grateful for my previous travel experience that made me feel really comfortable there.” 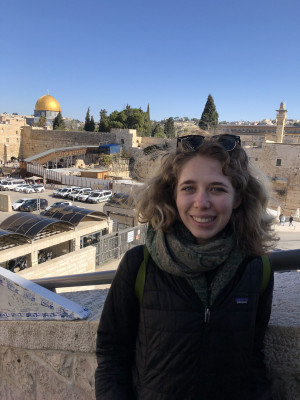 Reflecting on her time in Israel, Sonia explained how different this trip – the other countries she had traveled to were chosen out of academic or personal interest but birthright was so personal and identity driven. “I had the most wonderful time connecting to my personal history but also with a completely unique culture. I had the greatest time and made so many friends and can’t wait to go back!”