On one campus, students use their hands as viewfinders in order to learn about filming on cameras that remain out of their reach. At the other, students work in labs and studios, able to touch the equipment to film and edit pieces inspired by the work of their distant classmates. They all share one alma mater—Hail Marymount—although one version includes a rap. These are all MMC students, some attending classes in Manhattan and others enrolled in the College’s degree-granting program at the Bedford Hills Correctional Facility for women in Bedford Hills, New York.

The Bedford Hills College Program (BHCP) operates within New York State’s only maximum-security women’s prison. This spring, students from the BHCP and the main 71st Street campus participated in an artistic exchange as part of the College’s annual social justice-themed Stand Up Speak Out (SUSO) festival. 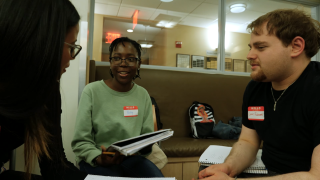 The exchange began at 71st Street, where students met to discuss the project and draft a first round of poetry, through workshops guided by Professors Daphnie Sicre and Suzanne Gardinier. From there, the poems traveled to Bedford Hills, where students responded by expanding the original poems. Instead of titling these new works, the Bedford Hills authors added simple dedications to the 71st Street authors of the first piece, such as, “For Julie + Michael.” This choice effectively illustrates the tone of the festival; rather than speaking for another person, participants focused on honoring all voices involved in the collaboration.

The revised poems were made into storyboards and all of these Bedford Hills works were sent to 71st Street. Back in Manhattan, playwriting and illustration students began to create original pieces inspired by the poems, while film students executed the storyboards as short films. Before they started filming, filmmaking teams received voice recordings of the Bedford Hills students reading the poetry aloud and talking through their storyboards. For many of the 71st Street students, it was difficult to be so separated from their collaborators, but it also made this brief moment of connection more precious. “Not seeing their faces made hearing their voices louder,” said Theatre Performance major Alex Muscaro ’19. 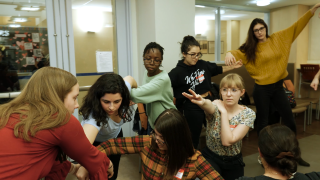 The resulting pieces (films, plays, and illustrations) were presented in a festival at the College on March 16, alongside the poems and a short documentary film containing footage of students on both campuses participating in this collaborative process—a call and response through different artistic mediums. For me, hearing and seeing the BHCP students in the documentary as part of the festival at 71st Street reinforced the idea that we are all artists and collaborators depending on one another in the creation of our work.

For Max Berry ’21, one of the 71st Street playwrights, a major impact of watching the BHCP side of the project was appreciating the “genuine enthusiasm…. I so admire that.” Sofia Pipolo ’20, one of the filmmakers and the president of the Bedford Hills Club at MMC, also noted the creativity and humanity in the work received from the BHCP students. “They were so funny,” Pipolo said. “We watched the videos of the women explaining their storyboards…they were laughing at their bad drawings like we all do.”

Pipolo also shared how the Bedford Hills Club has been trying desperately all year to interact with the BHCP students at this level, but security barriers have made it exceedingly difficult. With restrictions on communication and what physical goods can enter and leave the prison, any collaboration between the campuses is difficult. For example, earlier this year a toiletry drive intended to support the incarcerated women was stalled and ultimately cancelled due to a security issue; the items collected were redirected to a nearby women’s shelter instead. Consequently, the success of SUSO felt like a unique achievement.

The remarkable part of this exchange is that its structure necessitated both connection and follow-through in a way that is rare between the campuses. Pipolo explained that, in the Bedford Hills Club, students talk about the sociological ideas operating in the separation between our student bodies and the human rights issues at play in the justice system, but, for her, interacting with the Bedford Hills artists on this level made these ideas more personal, thereby grounding abstract concepts in reality.

Something about the time crunch and the feeling of the responsibility within the atmosphere of the project required the 71st Street students to lean on one another in ways I hadn’t expected. Students at the main campus held one another accountable to the level of work that came from BHCP. For example, the playwrights gathered late one night, lounging on mats on the floor of a studio to share their work and receive feedback. Responding to the words of people they’d never met, who deal with circumstances very different from those in their own lives, led to some challenging conversations about the portrayal of different groups, the impact of aesthetic choices, and the ethics of expression. These types of group considerations and discussions aren’t entirely new for playwrights, but Visual Arts major Cydney Bittner ’21 explained that this style of work was a huge departure for the illustrators. Describing their challenge as the responsibility of “lending my skills to [the BHCP students’] freedom in their ability to do this,” Bittner explained the difficulty of portraying the full range of expression in the poetry without making assumptions about the BHCP writers. While they often work independently or with a single author, during this exchange the illustrators brainstormed together, teasing apart the poetry for central ideas and representative motifs. They pushed one another to emphasize these intentions over individual aesthetics.

My role in this exchange as dramaturg and student producer involved presenting research early in the process to inform the work, and then guiding the development of the plays at 71st Street. In my first presentation, I shared research about Bedford Hills to contextualize the circumstances in which the BHCP collaborators live and make their work. In an effort to make the exchange more equitable, I also worked to interrogate concepts such as the privilege of expression, the ability to claim and change one’s identity, artistic function, and how we find commonality across difference. I hoped to combat any preconceived biases, challenging the 71st Street students to question their own perspectives as artists and preparing them to enter into the collaboration informed and committed. I noticed that exploring these concepts theoretically at the outset fostered an earnest engagement throughout: I saw 71st Street students rise to meet their BHCP counterparts by engaging in deeper conversations about their work and its impact; I would argue that this accountability made the art stronger.

Like most MMC students, I don’t think a lot about MMC’s mission on a daily basis; however, the College’s educational values were clearly demonstrated in this exchange. As two student bodies interacted and we each stretched ourselves artistically and intellectually, we began to develop the awareness of social, political, cultural, and ethical issues that an MMC education aims to cultivate. At MMC we often talk about using art for social change and being activists, but SUSO gave students the opportunity to move from talking about change to experiencing it in practice. In the past, I’ve often thought about how my work might land with an audience, but the focus here shifted to the presence and engagement of the creator.  I urged playwrights explore the poetry they received and think about how they could interact with all of the complexities of the work, in addition to being mindful of the context. It was important to me that the purpose not be to make work about incarceration or to work with incarcerated women, but to honor the perspectives and integrity of all collaborators as artists.

In an ideal world, I would continue to honor all voices by interviewing the Bedford Hills participants about their experience and include their reflections in this piece, but security logistics create a very real barrier between our campuses. For instance, the plays are currently being vetted so that they’ll be allowed to live as a book in the facility’s learning center, where we hope the illustrations will also hang as posters on the walls. Fortunately, I was able to watch video clips of the Bedford Hills students’ reactions to the films they’d inspired; the footage was taken by Professor Erin Greenwell when she visited the facility for a festival wrap-up and film seminar, which she taught alongside Professors Cyrille Phipps and Yessica Curiel Montoya. In the first few frames, previously stoic students were wiping away tears. “I know that’s right,” said one woman in response to the image of two flags on screen that she’d scribbled in her storyboard. Murmurs of “so cool…that’s how I saw it in my head” punctuated the clips.

At the end of the seminar, as Bedford Hills students were rushing out, there was no time for questions – I’ve realized that lateness and logistical delays are an obstacle common to all MMC students. However, the camera did capture one student who asked, “Will you tell them we said thank you?” Watching that, I wanted to respond to the BHCP students more than ever, if only to return the thanks.