Recently appointed by MMC President Kerry Walk to the role of Assistant Vice President/Dean of Academic Excellence and Senior Advisor to the President, Michael G. Salmon, M.Sc., draws on his rich and varied experience to make a life-altering difference in the lives of all those around him.

Born and raised on the Caribbean island of Jamaica, Dean Salmon, as he is universally known at MMC, was not only the first in his family to attend college; neither his mother nor his father had ever attended high school. “That’s partly why I’m so passionate about what I do,” he says. He might add that his past is partly what makes his present so remarkable.

Upon completion of primary school, Dean Salmon’s father was apprenticed into carpentry and construction, and then went off to work in the U.K., leaving his family in Jamaica. Having no formal education, young Michael’s mother went to work early each day, leaving her son in the care of his paternal grandparents, working class farmers living in the rural hills of Jamaica. Like their son, they had no high school education.

Yet his grandmother provided Michael with the motivation he needed to forge new paths. “She was passionate about the value of education,” he recounts. “She instilled such values in me at a very early age.”

At age 12, Michael was the only student from his tiny primary school to win a scholarship to one of the best boarding schools in the country—one that was usually reserved for more affluent students. With his grandmother’s loving and resolute voice ringing in his ears, he later enrolled in the University of the West Indies, in Kingston, Jamaica, determined to live up to her expectations.

There he met a prolific and world-renowned economist, Dr. George Beckford, a leading scholar of plantation economics, who became his mentor and inspired him to reach higher, even offering Salmon, at this point a young man of great promise, his first teaching position with the University. The positive impact of Dr. Beckford’s mentorship changed Salmon’s life.

Salmon with a portrait of his mentor, Dr. Beckford. “While I couldn't find a picture of us, I took this picture beside a wall mural of him in my old university in Jamaica when I was on vacation last year. He passed away many years ago, and I wanted to have this memory of him and the role he played in my academic life.”“From then on, I re-committed myself to realizing my poor grandmother’s dream, that with education, anything was possible,” he explains. “Simply put, that has been the source and foundation of my passion for education and desire to help others realize their own educational dreams.”

After receiving his Bachelor of Science and Master of Science degrees from University of the West Indies, he became a graduate student at New York University, where he was supported in his studies and ambitions by mentors and leaders in the field.

In 1993, a fortunate turn of events brought Salmon to MMC as an Economics instructor. He continues to teach one course each semester to this day. A student’s words speak powerfully to his unique qualities as an instructor. “Prof. Salmon speaks as if he is sharing the most interesting facts in the world and as if he is offering you some insight that would otherwise be a secret. Everyone in my class would agree, so much so that over 80% signed up for his class the following semester.”

At MMC, it didn’t take very long for Prof. Salmon to make the transition to Dean Salmon, an advisor who became the leader of the Office of Academic Advisement for nearly two decades. He worked tirelessly and enthusiastically to build Academic Advisement into the trusted and caring office it is today.

The legend that is Dean Michael Salmon has only grown with time. Passionate about educational access, he inspires people to think critically, decide wisely, and take action.

“More than anything else, our students need human beings. They need people who can make them feel that ‘You’ll be okay.’ Because, they will be okay here.”


In recent years, MMC’s Center for Academic Support and Tutoring (CAST) and Higher Education Opportunity Program (HEOP) were added to his portfolio of his responsibilities. HEOP has a special place in his heart.

“At Marymount Manhattan, my goal is to have an impact on others,” he says. “The students in the HEOP program are pretty much who I would have been if I were here in their situation. These are students who have a thirst for learning. They have passion to really make something with their lives, for their families. The only thing they are lacking is the opportunity to do it.” 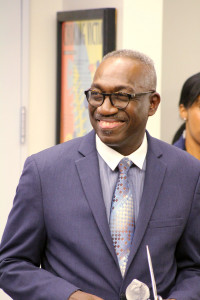 Dean Salmon at Charter Day 2019, recognized for his years of service to Marymount Manhattan College.Given his own life experiences, Dean Salmon has naturally been a force behind the development of many other programs that support students’ success, including the Peer Leaders Program, the First Generation Program, and the new LINK Program, a holistic advising program for first-year students.

It will come as no surprise that he was also deeply involved in developing MMC’s 2018 Equity, Diversity and Inclusion (EDI) Strategic Plan. “Especially in recent years, I think the College has doubled down on our commitment to social justice, equity, diversity, and inclusion,” he says. “We’ve committed ourselves more to supporting these students.”

Students are not the only ones who have benefitted from Dean Salmon’s caring approach. Since Day One, he has made it a point to look out for parents, staff, and faculty. “When I first arrived at MMC over 20 years ago, it was Michael who trained me to be a faculty advisor,” shares Peter Naccarato, Ph.D., Interim Vice President of Academic Affairs and Dean of the Faculty. “Over the ensuing years, I’ve continued to learn from him as we’ve collaborated on countless projects.”

An award-winning higher education leader on the national stage, Dean Salmon will now be using the lessons and experience garnered over a lifetime to reach an even wider circle of MMC students, alumni, families, and friends in his new role.

“Dean Michael Salmon is an ambassador of excellence wherever he goes,” states President Kerry Walk. “He truly embodies the MMC spirit. With his vast knowledge and unflagging care for every member of the College community, I’m confident that he’ll help us reach new heights.”