The entire Marymount Manhattan College community mourns the passing of Eilene Keller Bertsch ’59, the longest-serving Chief Academic Officer in the College’s history. She will be remembered for her vision of making MMC more accessible and affordable, her kindness and compassion, and her love of all things Marymount Manhattan since the moment she arrived as a first-year student—65 years ago, in 1955.

“Those of us who knew Eilene feel her loss so profoundly because her impact on MMC, and on us personally, was so profound,” said President Kerry Walk. “Early on, she clearly saw that the College’s civic responsibility was to make educational opportunities available to all. Her leadership shaped the College that we know and love today.” 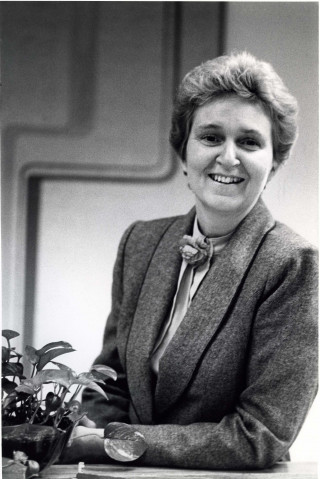 Eilene Keller Bertsch ’59Eilene Keller Bertsch grew up in the Bronx, attended a high school established by the Religious of the Sacred Heart of Mary (RSHM), the order of women religious that founded the network of Marymount schools and colleges around the world. As a student at Marymount Manhattan, she developed a particular interest in immigration and became a fierce advocate of embracing people of all backgrounds and personal identities. After earning her B.A. in Sociology from MMC in 1959, Eilene was awarded a fellowship to travel to Europe, providing her with abundant opportunities to experience other cultural norms and values. She deepened her knowledge through graduate study at Fordham University, where she earned an M.A. in Sociology.

Marymount Manhattan soon beckoned, and Eilene heard the call by returning to her alma mater as a faculty member in Sociology. Deeply committed to social justice, she became a driving force in the College’s efforts to recruit students from under-resourced communities in the New York area. In 1967, she established the Community Leadership Program (CLP), which provided scholarship aid and support to a cohort of students from economically and educationally disadvantaged backgrounds. The cohort model was highly effective, and Dean Bertsch’s vision of college accessibility and affordability for all was becoming a reality.

Thanks to Dean Bertsch’s dedication and commitment, in 1969 MMC was selected as a charter member of New York State’s Arthur O. Eve Higher Education Opportunity Program (HEOP), a cohort-based scholarship program for New York residents. The CLP was folded into HEOP, which today is among MMC’s most successful programs, boasting a graduation rate of over 85% compared to 10% for the same demographic nationwide. In 2019, MMC celebrated HEOP’s Golden Jubilee, during which Dean Bertsch was presented with an award of appreciation of her work as the visionary founder of a program that opened the College’s doors to students for whom an MMC education would not otherwise have been attainable. 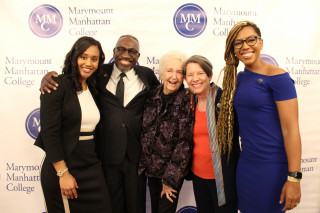 (From left) HEOP Director Harmony Cross, Assistant VP/Dean of Academic Excellence Michael Salmon, Eilene Bertsch, President Kerry Walk, and Chief Equity, Diversity, and Inclusion Officer Rebecca Mattis-Pinard“I am so thankful and appreciative for Eilene’s transformative leadership, vision, and commitment to social justice,” said Harmony Cross, MMC’s HEOP Director. “Generations of HEOP alumni, along with current HEOP students, cherish the memories that we had with her. She made a remarkable and long-lasting impact on all of our lives, and we promise to continue her legacy.”

The founding of the CLP in 1967 was just the beginning of the groundbreaking work that this extraordinary MMC alumna would undertake. Over the next twenty years, including twelve as the College’s longest-serving Chief Academic Officer (1975 – 1987), Dean Bertsch spearheaded grant proposals that garnered millions of dollars to build out student services, such as academic advisement, tutoring, and counseling; establish a student learning center and a faculty development program; and enhance the classroom experience for students. During those years, she also worked closely with then-President Colette Mahoney, RSHM, to diversify the student body in terms of race/ethnicity, gender, and age. Retiring from MMC in 1987, Dean Bertsch spent the final chapter of her distinguished career as a higher education leader at Sacred Heart University in Bridgeport, Connecticut.

In 2017, in recognition of Dean Bertsch’s pioneering work at MMC and her commitment to equity, diversity, and social justice—long before these were stated core values of the College—The Eilene Bertsch HEOP Award was established. The award is given annually to the graduating senior in the HEOP program who has demonstrated outstanding leadership and academic achievement.

In a tribute shared with the MMC community, Dean Emeritus Peter Baker wrote:

I should like to give special thanks to my professional partner of many years and friend for even longer, Dean Eilene Bertsch…. We were a team and I was delighted to work under her leadership. I learned most of what I ever knew about responsible leadership and academic politics from her. And especially I learned from her about being a statesman and writing that way. She beat all the idiosyncrasies and buzz words out of my prose. She was in every sense the great dean, and many of the academic structures and procedures she put in place serve as foundation for developments that came later. Thank you, dearest of friends.

Dean Emeritus Baker captures the sentiments of the entire MMC community: we thank our dearest of friends, Dean Eilene Keller Bertsch, for her dedication and commitment to her beloved college, and we extend sincere condolences to the Keller, Bertsch, Hecht, and Young families during this time of sorrow.

Private services were held at St. Pius X Church in Fairfield, Connecticut. In lieu of flowers, the family requests donations be made to Marymount Manhattan College, Mercy Learning Center, or The Merton Center. Gifts to MMC made in memory of Eilene Bertsch will support HEOP students, each one of whom she cherished as her own.