On October 30, 2020, Marymount Manhattan presented Everybody—one of the College’s first entirely virtual theatre productions (the very first of which being Playwriting Projects and DPs from the Spring 2020 semester). A collaboration between students, faculty, and staff, Everybody displayed pioneering efforts by the Department of Theatre Arts, exemplifying the versatility of MMC’s Virtual Class/Open Campus model.

Directed by Adjunct Instructor Paul Takacs, the production had a number of obstacles to overcome due to the limitations brought on by the COVID-19 pandemic. Without access to MMC’s mainstage, the production crew and cast took their talents home to perform over Zoom.

To bring the stage to life in their homes, students were shipped care packages with the materials necessary for their roles. Each actor and actress received a green screen with clips, lighting kits that were controlled by a phone app, props, costumes, and other equipment. MMC Production Coordinator Hannah Mason proved invaluable in the shipping process, supporting set and costume designers.

“Hannah’s sensitivity and gentle kindness with which she worked with the students helped keep the heart of the show safe, alive, and vibrant,” says Takacs. “I don’t know that the play would have been nearly as rich if not for her involvement.” 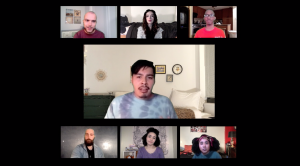 Student cast and crew rehearsing a scene over Zoom.Along with MMC’s staff, the student production crew was key in adapting Everybody to be performed from home. Student lighting designers worked with actors to hang lights in their apartments and to chroma key their green screens. Costume designers virtually met with performers to organize their wardrobe and select character clothing. Set designers and sound designers worked together to determine virtual backgrounds, video transitions, and other elements that took advantage of the Zoom environment.

“The whole idea is that we were supporting our students to give them the best experience they possibly could have,” says Professor of Theatre Arts and Assistant Chair for Production Ray Recht. “Creating a production in a new medium was a phenomenal learning experience because our designers now can go forward in their careers having yet another way of practicing what they do.”

Student actors and actresses faced a number of obstacles transitioning from the big stage to the small screen, but they were up to the challenge.

“Acting over Zoom is surreal and requires a lot of imagination,” says junior Musical Theatre major and member of the ensemble Jacqueline Leon. “Feeling the energy in a room and feeding off the audience—things that make acting such a powerful and addictive experience—are just not possible. However, there is something to be said about talking to the corner of your room and still feeling grounded in your scene work. It reminds me that what makes acting meaningful is our commitment to the text. I like being a container for thoughts and lessons, I like being a guide for the audience. That doesn’t change on Zoom.”

Video Enginer Matthew Straub ’19 set up multiple computers to control Zoom, Isadora, and other programs during the live ‘Everybody' virtual performance.Technological Innovations

Under the guidance of MMC’s Multimedia Technician and graduate of the Interdisciplinary Studies program, Matthew Straub ’19, and Adjunct Professor Rocco DiSanti, new software and technology were used to make the Zoom production possible.

Straub, who served as the production’s Video Engineer, utilized an advanced version of Zoom called ZoomOSC that allows for customized interfaces and control for live performances. Using ZoomOSC, Straub controlled everything that appeared on the audience’s screens. For each actor, Straub was able to pin, spotlight, mute/unmute, and turn on/off their video feeds.

Kasey Ackerman, a Theatre Arts major, alongside Megan Bros, a Theatre Arts and Public Relations and Strategic Communication double major, innovated their roles as stage managers using software as well. Instead of using headsets as they would on the stage, they used Discord, an instant messaging software that uses private servers for voice, video, and text communication. Ackerman and Bros used communicated with both actors and the production crew, intermediating the status of performers and cueing Straub to put the talent on screen.

Knowing the potential challenges of the virtual environment, the stage management crew additionally employed a preparedness drill in the event that a performer’s camera cut out, lost internet connection, or other technical difficulties. This drill was well worth it, as an actor dropped out of the Zoom call during two performances.

“The cast was actually very good at picking up lines and working with the technology,” says Bros. “We admitted them back into Zoom and I places them where they needed to be. The audience didn’t even notice, so even with this difficulty, it all went pretty smooth.”

“I think a lot of this new technology will be integrated into how we used to create productions,” says Zepp. “A lot of the aspects of this new format are cheaper for producers, and we’re able to reach people from across the country. We’re not losing anything by working virtually; the majority of the students spoke on how surprising it was for them to feel as connected to the actors.”

Students who participated in the play, both the production crew and cast, expressed how they feel more prepared for their careers with this experience under their belts.

“I would say that I’m definitely a lot more adaptable than I was before this process started,” says Bros. This is my first time stage managing a mainstage at Marymount, so the fact that I started with something as disruptive as a virtual production makes me feel comfortable and prepared for a future career in theater.”

Working with the production crew, student actors were exposed to new aspects of theatre production, such as setting up their own green screen and lights. “I learned what makes effective direction looks like and the capabilities of technology in storytelling,” says Leon. “Adaption is key.”

“It was a learning experience for all involved and I think that it’s also something that will only stand them in good stead as they move forward in their careers,” says Takacs. “I feel like all of us were like pioneers, heading out West and encountering Terra incognita, you know?”

“I’ve directed a few productions, but I’ve rarely encountered a company that coalesced to the degree that this one did by the end of it all,” continues Takacs. “It was really extraordinary how a bunch of people who had never shared a space had come together to such a degree in this new endeavor, and it was entirely a product of the chemistry of these unique and wonderful students. I’m very proud that they were able to arrive at a place where they really felt like a cohesive company that really could lean on each other and could work through this experience. I’d love to claim responsibility for it, but they were really just an extraordinary bunch.”

Note: An earlier version of this article incorrectly stated that this was the College’s first fully virtual theatre production. The first MMC virtual productions included Playwriting Projects and DPs from the Spring 2020 semester.

This story is part of a larger series, MMC Together, published by Marymount Manhattan College’s Communications team. Have questions or a story lead? Email Communications@mmm.edu.