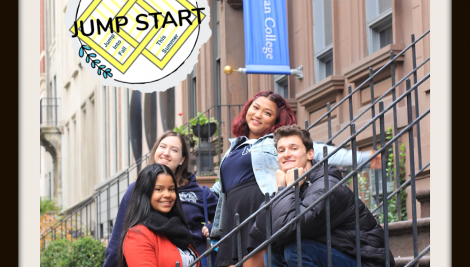 Anthony Michael D’Agostino has served as an adjunct instructor at Marymount Manhattan College for six years and a tutor on and off since 2007.  He is also an instructor for MMC’s summer program for rising freshman, Jump Start. He earned his doctorate in English Literature at Fordham University. His work concentrates on the nineteenth century novel, super-hero comics, queer theory, and feminism. His articles, “Flesh-to-Flesh Contact: Marvel Comics’ Rogue and the Queer Feminist Imagination,” and “Telepathy and Sadomasochism in Jane Eyre,” appear in American Literature and Victorians: A Journal of Culture and Literature, respectively. In 2018, he was the recipient of MMC’s first ever Adjunct Teaching Award in Writing.

Nathan Austin lives in Los Angeles, where he spends his free time hiking in the Santa Monica Mountains and studying the points of contact between the natural world and the anthropic. He is the author of (glost), Tie an O, and Survey Says!, the latter of which was also included in Against Expression: An Anthology of Conceptual Writing. In the past year, his visual poetry has been included in Translation: a Halophyte Collective exhibition (Downtown Artist Collective, Salt Lake City) and the mimeograph zine ToCall, and published as the broadside Surround Sound (for Éliane Radigue). His writing has appeared in Sink Review, Little Red Leaves and The Believer. He holds a PhD in Poetics from the English Department at Univ. of Buffalo and taught writing courses at MMC from 2009 to 2016.

Lauren is new to CAST this year, and will be working as a Learning Specialist in Academic Access as well. She comes to Marymount with 15 years of experience in higher education, having taught composition and literature at Stony Brook University, Fordham University, and multiple campuses in the CUNY system. Lauren holds a Ph.D. in English from Stony Brook, where she studied the intersection of science and narrative. A current research project in the works would look at the impact of developing a regular writing practice on undergraduate composition. A lifelong lover and occasional student of dance—who has lately begun to brave the adult classes at studios around the city—Lauren is thrilled to be working at an institution so invested in arts.

Holly graduated from the University of Texas in 1988 and received a law degree there in 1992.  She practiced law at a large firm in Washington D.C. for many years before “retiring” to raise her four children. When it came time to re-enter the workforce, Holly knew she wanted to work more directly with young people.  She volunteered as a writing tutor at Westchester Community College for a number of years and loved it.  When Holly moved to New York City several years ago, she found a home at CAST.  She enjoys the relationships that she builds with students while helping them reach their fullest potential.  When she is not working at CAST, Holly enjoys spending time with her family, traveling, going to the theater and baking.

Deanna Twain has been teaching American Sign Language and Academic Writing at Marymount Manhattan College since 2000. A former actress, she worked with her late husband, producer Norman Twain, developing film scripts and plays and working with the writers on those projects. She was the lead producer on their last project together, The Lifespan of a Fact on Broadway with Daniel Radcliffe, Cherry Jones and Bobby Cannavale.

Dawn graduated with a BA in English and a minor in Comparative Literature from Queens College in Spring 2002.  After a long hiatus in her education, she is currently enrolled in the MA program in English at Queens College and hopes to graduate by Spring 2020.  Dawn is interested in Composition and Rhetoric Studies and multi-ethnic literature in the United States, especially in the area of Asian American women’s literature.  She is working on a research project that focuses on Chinese American immigrant women’s autobiographies/memoirs that emphasize the mother daughter inter-generational dialogue through the craft of storytelling as a way to heal from personal trauma.

In recent years, Dawn has attended both regional and national conferences on tutoring in general and writing tutoring in particular.

Osman Tamim joined Marymount Manhattan College as a Math Coach in 2011 and has served as an adjunct instructor from time to time, as recently as summer 2019. He has also been an adjunct lecturer at St. Joseph’s College, Brooklyn. His research interests include nonlinear and convex analysis, optimization, and game theory. Degrees: M.S., Mathematics, NYU Polytechnic Institute, M.S., Applied Mathematics, University of Putra, Malaysia, B.S., Education, Mathematics and Physics, University of Juba, Sudan.

Zhan holds a B.S. in Math and is currently enrolled in a MA program for Adolescent Math Education at Hunter College. Zhan has been tutoring for 5 years across 3 colleges. Prior to CAST, he tutored at Hunter College and Laguardia Community College. Zhan’s interests include the Actuarial Sciences, as well as teaching Math and Statistics. After graduating, Zhan plans to teach at a high school or college setting. In his free time, Zhan likes to go on drives around his neighborhood and play handball.

Maggie is a sophomore at Marymount Manhattan College, studying Literature with a concentration in Literature and Media, and Business with a concentration in Leadership. Most recently, she worked as a marketing intern for the Morristown Festival of Books. After college, she plans to go to grad school to get a master’s in publishing. She hopes to one day start her own publishing house for children’s and young adult literature. When she’s not studying in between the stacks of the third floor library, you can often find her in the theatre district seeing a Broadway show, or running in Central Park.